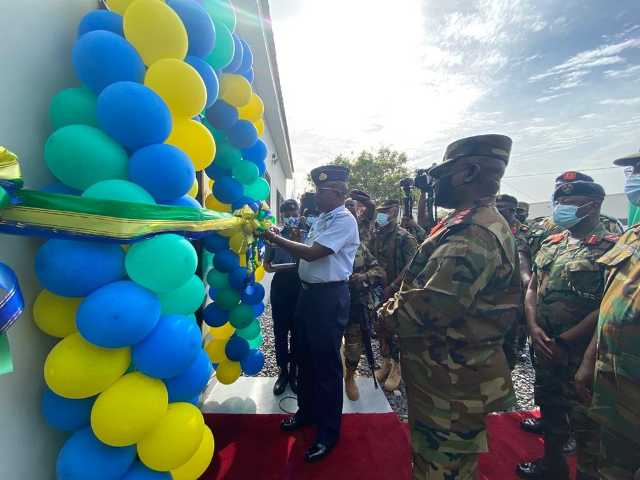 The facility is part of the ongoing development and transformation of the training camp and includes a 1,000-capacity auditorium with modern seating facilities and a briefing room.

It is suitable for all military gatherings, including parades, durbars and social gatherings.

The Air Vice Marshall Hansen said recent projects being undertaken by the GAF, which includes a Forward Operating Base for the Bui Dam, showed the “forward march” of the nation’s armed forces.

He noted that streamlining and modernising training in the GAF was at the centre of several discussions at the Command and Staff levels in the past, and commended Maj Gen Oppong-Peprah, the Chief of Army Staff (COAS) for his commitment to the transformation drive.

“These involved the provision of modern infrastructure for teaching and to accommodate troops, however, these ideas did not materialise until May last year when Maj Gen Oppong-Peprah led his staff officers to boldly launch these projects including the construction of the modern troop’s accommodation and the Central Auditorium, which would culminate in the establishment of the Army Operations Training School,” he said.

AVM Frank Hansen admonished troops using the Bundase Training Camp to maintain their brand as peacekeepers as it remained a “vital” foreign policy for Ghana and projected the qualities and capabilities of the military.

Troops were also encouraged to imbibe the quality training they received at the Camp, and operate on the professional knowledge they acquired.

Maj Gen Thomas Oppong-Peprah said his vision to “lead a well-motivated, well trained and well-resourced Army capable of performing any assigned tasks,” which he said was possible through teamwork on a united purpose.