Shatta Wale’s silence on this issue was quite
unusual, though expected. It was far from the
usual Shatta Wale, who barks at the smallest
Of flies that crosses his path. However, his
silence was also expected because Stonebwoy
and he are now back to being good friends.
Moreover, yesterday you would have come
across Stonebwoy’s controversial tweet about
Shatta Movement (SM). His tweet was a
cused of insinuating Shatta Wale’s SM fans
are thieves. Though the said tweet from
Stonebwoy, which was in reply to another

about a thief caught at Teshie got SM fans

rather gave it a more diplomatic approach, by

However, Shatta Wale on the low gave
Stonebwoy an equally epic reply. Though not
directly at Stonebwoy, Shatta Wale’s post was a

direct reply at what Stonebwoy was alleged


to have insinuated. Take a look at what Shatta
wrote: 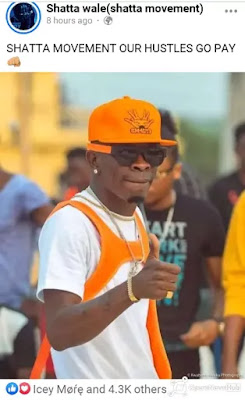 Shatta Wale wrote this, hours after

Stonebwoy’s tweet, but it can be seen
as a direct reply to Stonebwoy.
Shatta Wale in that post was

his fans, SM that whatever they may be
doing now as work, will surely pay off.

Which is quite contrary to what

Stonebwoy was being accused of
insinuating in his tweet.

Meanwhile, it is a direct reply to

Stonebwoy because Shatta Wale was

seen to have downplayed whatever

Stonebwoy said. And went ahead to tell it

to his face that, his fans work and

whatever work they do will surely pay off.


safer side could also be interpreted as a

mere motivational message to his fans.


Which may or may not be the case.

Celebritieshitz.com is not responsible for the reporting or opinions of contributors published on the website

Picture of the day

Video Of the Day

Celebritieshitz.com is your number one Entertainment website. A website which connects you to the world of Showbiz and Education. We also brings to you Entertainment News, Gossip, Events News, Latest music and many more.

Celebritieshitz.com is your number one Entertainment website in Africa, which brings it’s users, audience and readers close to the entertainment world. We work on different niches such as Entertainment news, Gossip, General News, lifestyle, Health news among many others. Celebritieshitz.com was extablished in the year 2019 with good bloggers, writers and editors working with them. We became one of the source in Africa that deliver accurate and up to date information to the our readers.
Contact us: info@celebritieshitz.com
Copyright © 2019 - 2020 Celebritieshitz Media
This website uses cookies to improve your experience. We'll assume you're ok with this, but you can opt-out if you wish. Cookie settingsACCEPT
Privacy & Cookies Policy

Any cookies that may not be particularly necessary for the website to function and is used specifically to collect user personal data via analytics, ads, other embedded contents are termed as non-necessary cookies. It is mandatory to procure user consent prior to running these cookies on your website.